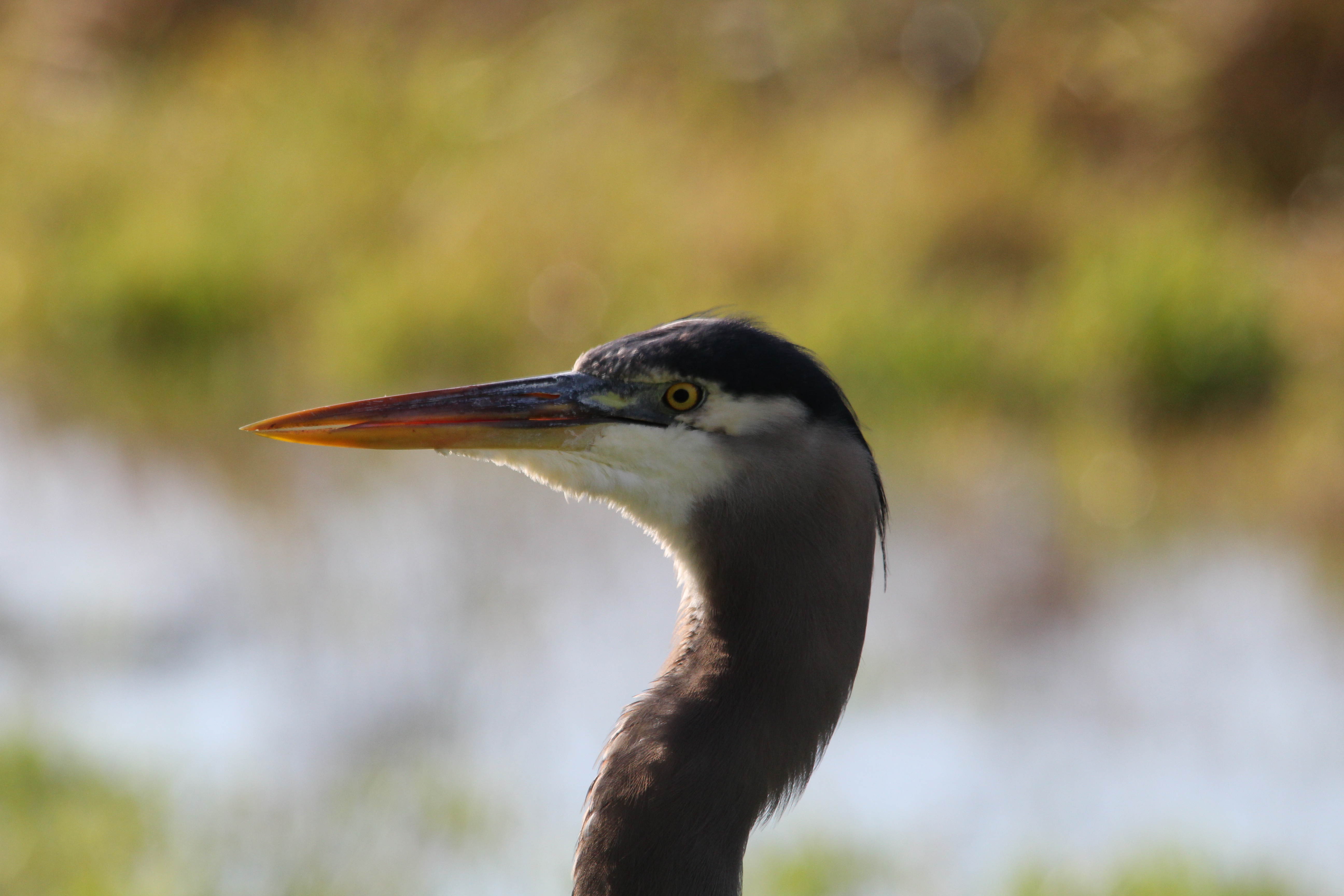 Last week I visited Nisqually National Wildlife Reserve.  It was my first visit after about a 3 month hiatus.  It was sunny and in the high 50s.  It wasn’t too windy and I was warm enough in my usual jeans and hoodie attire.  (I think I need to get some leggings to wear under my jeans for the colder months.  And a hoodie with ear flaps.)

The high tide was around 11 feet at mid-day.  I saw 4 blue herons close enough for photographs.  There were also a few other herons in the distance.

The first two blue herons were along the Nisqually Estuary Trail (before you get to the boardwalk).  One of them was hunting in the shallow waters on the Puget Sound side of the trail.  He found a little crab.

The other one was in the tall grass on the side of the trail closest to Interstate 5 highway.  It looked like the grass had been mowed, which I was surprised about.

While I was taking these blue heron photos, I also captured this photo of a large flock of birds.  I think they are juvenile Red-Winged blackbirds but I could be wrong.  (Please comment below if I’m wrong… thanks!  My first guess was Starlings because of the spots but the beak color is dark and they’re smaller).

I also saw a unique Blue Heron with white wing tips off the boardwalk.  (I think it was by the McAllister Creek Viewing Platform.)   Other birders told me that he was part albino and has been there for a couple of years.  He didn’t mind us watching and spent a lot of time grooming.

Sometimes he would stand on one foot and scratch his ear.

There were Harbor Seals sunbathing in the distance (really far away, you would need binoculars to verify that they were Seals.)  There was also this seagull trying to eat a flounder.

It took him a long time to swallow that fish!  He kept dropping it and picking it up again.  I captured over two minutes of this funny dilemma on video:

At high tide, there were still some exposed mud flats that were like a little resort for small shorebirds.  I had a hard time identifying these guys, but I think they are Western Sandpipers.  If I’m wrong, please let me know in the comments below.

I also checked out the Nisqually River overlook and saw a Spotted Towhee foraging in the brush by the water:

The water levels were very low in the marshy area along the Twin Barns Trail.  We’ve had a drought this summer so I guess that’s no surprise.  The trees were still almost fully clothes with leaves.  There were maple seed pods on the trails.  I saw one snake on the wooden path part of the trail.  This is a common occurrence, as I think I’ve seen a snake about 25% of the time I’ve been there.  (I think it was a Garter Snake.)

I think I saw a Peregrine Falcon on one of the dead trees.   I got a photo but it’s blurry.  I’m really bad at estimating distances (anyone know the distance from the Nisqually Estuary Trail to the dead trees?) but the bird of prey was far enough away that it was hard to focus on, even with my Sigma 500mm lens.  It looks like I should have switched to manual focus.  Next time I will have to try.  That and use a tripod.  (I have a tripod by carrying it is a difficult task for me.  Yes, my lens is heavy but not as awkward as a tripod.  For me, personally.  Maybe something will change my opinion on that someday.) I guess this photo goes to show you that I take bad photos too.