My Grandma’s Mushrooms: Needlepoints and Paintings 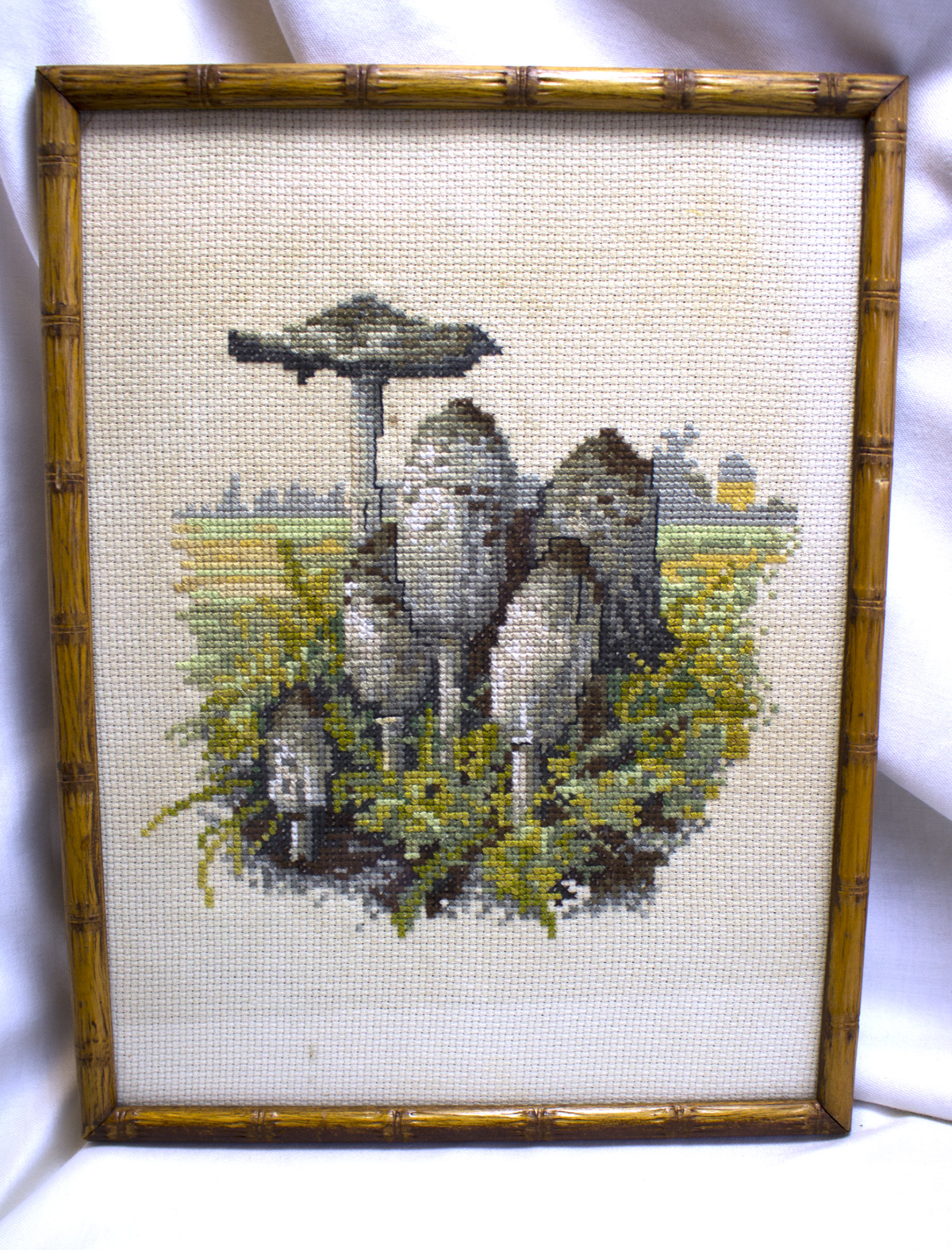 My Grandma was an amateur Mycologist (mushroom scientist).  I’m not sure when she first got into studying them, but she was in her 70s when she was teaching me about them.  When I was a kid, we would go foraging for mushrooms in our backyard woods.  We lived in the mixed deciduous and coniferous forests of the Mid-Huson Valley in New York state and we found everything from puff balls to the rare Stinkhorn.

In that photo, I’m holding a poisonous Amanita.  My Grandma had lots of books about mushrooms, and we would look at her handbooks to identify our finds.  Some of her books seemed very scientific and advanced to me.  They had a clear methodology for identification, and sometimes that involved doing spore prints to see what color the spores were.  Spore prints are easy to make with gilled mushrooms.  Just remove the mushroom cap, set it gills side down on paper, and put a glass around it or some other container, to prevent air movements from disturbing it.  Leave it there overnight.

Every year, my Grandma and Grandpa went to the North American Mycological Association Annual Foray.  One year, they had the Foray near me, and I got to go to see all of the mushrooms that they found!  From my understanding, it was a like a convention where all of these people who love mushrooms go out into the countryside to collect mushrooms.  They bring them back and identify them and place them on the tables along with signs that have their latin names.

As you can see, they found a lot of mushrooms that year!

My Grandma taught me a lot about science.  At 10 years old, I knew all about how mushrooms grew on decaying wood, how their root like structures were called mycelium and lots of other fun facts!

My Grandma was also quite an artist and crafter.  I recently inherited some of her artwork and I wanted to share her fungi needleworks and mushroom watercolor paintings.  That’s the real reason for writing this post.  On the internet, her creations have a much better chance of lasting forever! This mushroom needlework has such pretty pink mushrooms.  I’m not sure what species they really are, but they remind me of the Red Russula Mushrooms that we often saw on our walks.  However, Russula mushrooms have gills, not like those in this needlework.

That’s a nice example of Amanitas in all of their above-ground life stages!  Amanitas are usually poisonous (some even deadly), but fortunately are fairly easy to identify.  You have to watch out though, because sometimes their rings deteriorate, so you can’t rely on them always having a ring.  They do have a cup (at their base), they always grow individually (alone, unattached to others), and often have spots but not always.

We found a Morel mushroom only once.  Ever.  Apparently, they like to grow under Apple trees and other things we didn’t have. Thanks for looking at my Grandma’s mushroom art!