Here are a set of old black & white photographs taken of my childhood house located in the Hudson Valley, New York.  Actually, the house was only partially completed when these photos were taken.  It looks like it was a cold winter, with a frozen pond and snow.  I love the stark look and someone had a good eye for photography! 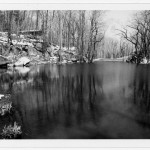 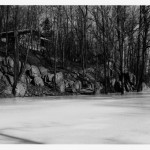 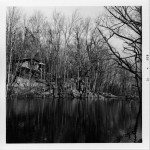 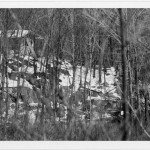 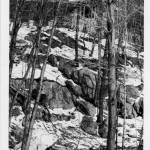 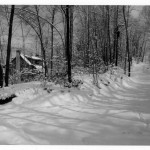 Winter Wonderland, Black & White Photo, on the way to my Grandparents’ House The Gray Catbird was the first bird I heard when I arrived at my parents’ house. I said, “Do you have a cat?” No, they didn’t have a cat. Hmm… is there such a thing as a catbird? I did an internet look-up, and sure enough, there is a Catbird species that summers in New York state. Ahh.. That might explain why it sounds like there’s a cat in the tree!

I didn’t get a good photo right away because it was raining for the first few days. Fortunately, I heard and saw catbirds every day, right near the house, and near the clearing by the driveway. I was surprised that I didn’t remember hearing them as a kid. There must have been at least a half dozen of them singing morning and evening. They make other songs besides the cat imitation and were relatively friendly. Finally on a sunny day I got these photos. Sure enough, the bird has a long tail, a rufous patch under the tail, and a small dark cap. It is a Gray Catbird! Apparently, they like Putnam County, NY just fine, at least in Late June/Early July, during an uncommonly cool summer.